Mr Day - Dry Up In The Sun (Favorite Recordings) 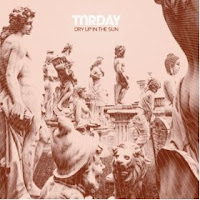 French indie pop takes a new turn, where soul meets traditional R&B (not the nasty new imposter), and a trickle of funk-punk emerges amongst these classy anthems to all things Stax, Tamla and Atlantic. Antiquated? No, never has been, never will be, especially when the band retain their indie pop identity. In fact, definitely file it under indie, but it’s gently twisted and infused with the soul sound of the early and mid ‘60s, and contemporized by expert performances. It may have been done before, but I’ve never heard it done better.

Once you’re initiated to the proceedings with opening cut "Food For Soul", it’s easy to pick up the iconic beats that fill "One Step" and "Forgotten Realms". The former could be Paul Young in his heyday with the Q-Tips (the later "Caveman" is similar, celebrating an era that was spearheaded by the likes of Geno Washington and Young’s band), and the latter is Motown, with Philly on the side, and a devilish mini psyche-pop section breaking up the vocals. It ends in mournful splendor with violins and cellos, and this mix of disparate elements works beautifully.

The more you listen, the more you become enchanted with “Dry Up In The Sun”. Just lend an ear to the superb Booker T-style organ that supports the grooving vocals on "Right On", and then again on "Follow You", where it’s much more to the fore, and heading towards the great Jimmy Smith's best work. "Head Down In The Water" follows, where a touch of Sly Stone has been added to this extraordinary music, at one moment you’re transported back to Manchester's Twisted Wheel, the next, you’re dancing around the living room in the here and now, arthritic knees be damned!

If all that isn’t enough, on the last three tracks we get a little Marvin Gaye on "Queen Of The Minstrels", Bobby Hebb (remember "Sunny"?) on the title track, and, Love and The Beatles circa “Forever Changes” and “Revolver”, on "Party Party". What a knockout album this is! What a delight! Calling all soul brothers and sisters, go buy it now!
www.facebook.com/MRDAYofficialpage
Kev A.