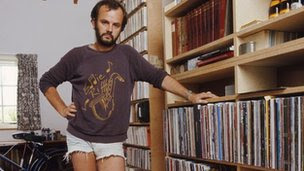 The names of the first 100 albums of the late DJ John Peel's record collection have been published online.

The John Peel Centre, in Stowmarket, is behind the project, called The Space, which aims to recreate the late broadcaster's home studio and library.

Peel, who died in 2004, had a collection of about 25,000 vinyl albums. The names of about 100 will be added in alphabetical order each week.

Among the first artists are Abba, ABC, AC/DC and Adam & The Ants.

The website does not allow users to listen to the albums but there will be links to other websites which offer this.

There should be 2,600 album names put online by October, which is the period covered by Arts Council funding for the project.

The website also features a video interview with Mike Absalom, a singer-songwriter, poet and artist whose Save The Last Gherkin For Me (1968) was 001 in Peel's card index system.

Eye Film & Television, based in Norwich, has produced new films for the project and digitised the album covers and Mr Peel's index cards.

Charlie Gauvain, Eye's managing director, said: "These cards have been scanned, often with typos, so we have tried to make it personal and make it feel the way that John kept his LPs.

"People will be able to trawl through the site, find a lot of information, link out and start lots of discussions, but the whole thing is about introducing people to stuff they hadn't heard of."

Andrew Stringer, a director of the John Peel Centre, said: "This is just the first step and a fantastic portal to give the career of John Peel the justice it deserves.

"Whether people listened to his shows or not, their social history has been influence by him because nothing was deemed 'out of the box' and it encouraged people to expand their horizons.

"Would punk have been the movement it was without John? I very much doubt it."