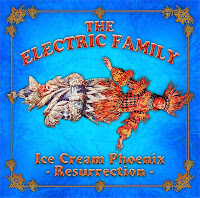 I can’t say I’ve ever previously come across them, though the fact that Rolling Stone’s David Fricke has written the liner notes probably means that I should have at least heard their name before. Musically, they’re an interesting mix of progressive rock, folk and alternative trance styles. Tracks like “Last Phase Of The Moon” and “Airchild” bring to mind artists like Kevin Ayers and Anthony Moore, and things like “Dancin’ Lady” and their version of Floyd’s “Careful With That Axe Eugene” have more than a hint of late period Hawkwind about them. Before we break out the hot-knives, things are calmed considerably by acoustic numbers like “Wisdom Of Wolves” and the grown-up, sustained guitars of “Axechild – The End”.

Not an easy album to pin down by any means, but certainly worth investigation if you’re partial to any of the above artists, or just appreciate the concept.
www.sireena.de
Simon M.