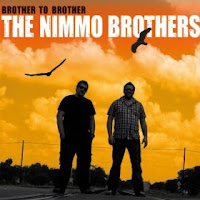 The Nimmo Brothers - Brother To Brother (Armadillo Music)
Long acknowledged as one of the UK’s premier live acts The Nimmo Brothers seemed to struggle for years to capture their hallmark twin guitar tour-de-force adequately on CD. Although 2009’s ‘Picking Up the Pieces’ seemed to finally address the problem, subsequent plays revealed a sag in the middle, with inconsistent material and a production quality that still wasn’t quite there, blunting its overall impact. This time around they really do seem to have nailed it. Decamping to The Zone studios in Austin, Texas, where Pat Manske moves up from engineering to production duties, and the recruitment of a team of seasoned pro sidemen has rounded out the sound, helped retain the necessary clarity but brought in a previously unattained depth.

The three-year interregnum hasn’t been squandered either, the Glaswegians having turned in some of their best songs to date.  Everywhere the guitars soar, and the brother’s voices take on an added maturity, less urgent and more resonant than we’ve heard before, and best evidenced in the opening salvo of ‘Still Here Strumming’ and ‘Lady Luck’ which states terms immediately; this is heavy, in-your-face gutsy blues which stands its ground but refuses to compromise on finesse.  There’s plenty of variety though: the slide-driven ‘Sneaking Up On You’ has an authentic Southern feel and could keep company with the Black Crowes’ finest, and the steady paced ‘Never Gonna Walk On Me’ has touches of Led Zep in full stomp mode which should guarantee it a warm reception on stage. This time around there’s no mid-set lull, courtesy of the smouldering ‘Waiting for my Heart to Fall’ which teases, then gathers pace, before finally bursting open in a manner that will be familiar to anyone who knows the Nimmos of old. A fine cover of ‘Wishing Well’ sets up an assured run-out culminating in Doyle Bramhall’s excellent ‘Shape I’m In’, concluding a collection the band should deservedly be pleased with.
www.bluearmadillo.com
Neil B.