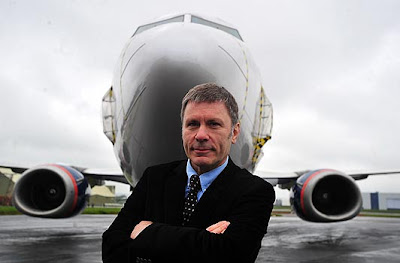 The lead singer of Iron Maiden says he hopes to create hundreds of jobs in south Wales, after launching an aircraft maintenance business.

Bruce Dickinson, a qualified commercial pilot, heads Cardiff Aviation Ltd, which will be based at the Twin Peaks Hangar at St Athan, Vale of Glamorgan.

The company is leasing the 132,000 sq ft hangar from the Welsh government, which said it was "delighted".

Dickinson said Wales had a long association with the aircraft industry.

St Athan is one of five new enterprise zones in Wales which officially opened for business last month, and focuses on the aerospace industry.

Cardiff Aviation will maintain airliners and other large aircraft for major and independent airlines.

It will also perform training, and claims to have the necessary approvals to certify aircraft from jurisdictions including the USA.

Dickinson, who has been flying for more than 20 years, said he had received "a level of enthusiasm and drive that has been a delight to behold," in his efforts to bring the business to Wales.

He added: "We're coming into this enterprise with the knowledge that we'll also be bringing business to south Wales.

"South Wales has long had an association with the aircraft industry and I am delighted that I am able to have a small part in the continuation of that tradition."

Dickinson, who joined rock band Iron Maiden in 1981, flew the Liverpool football squad to Naples in 2010 for a Europa League clash.

In 2008 he flew a plane back to the UK from Sharm El Sheikh, when thousands of passengers were left stranded abroad following the collapse of tour operator XL.

Business Minister Edwina Hart said: "We have been working closely with Bruce Dickinson and Cardiff Aviation on this exciting project for some time and delighted it has come to fruition.

"This is exactly the type of investment needed - bringing money into the local economy while also providing an international promotion for St Athan Aerospace Business Park and the Aviation Enterprise Zone.

"We have a strong dynamic aerospace sector in Wales and this investment will build upon the skilled workforce that already exists in the area, providing a range of career opportunities."