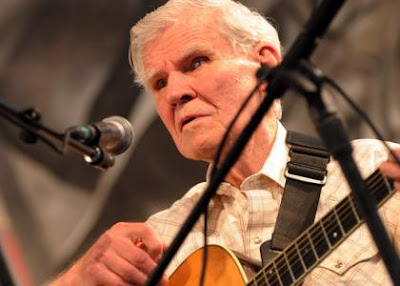 The American musician died following abdominal surgery, and had been in a critical condition for several days, his manager said.

Watson, who was blinded as a child, was known for his lightning-fast style of flatpicking which influenced guitarists around the world.

He won eight Grammy Awards including a lifetime achievement prize in 2004.

Watson died at Wake Forest Baptist Medical Center in Winston-Salem, where he was admitted recently after falling at his home.

"Doc was a legendary performer who blended his traditional Appalachian musical roots with bluegrass, country, gospel and blues to create a unique style and an expansive repertoire," his management company, Folklore Productions, said.

"He was a powerful singer and a tremendously influential picker who virtually invented the art of playing mountain fiddle tunes on the flattop guitar."

Blinded by an eye infection before his first birthday, he learned to play the banjo at the age of five before picking up a guitar in his early teens.

He got his musical start in 1953 playing lead guitar in a country-and-western swing band and became a full-time professional musician in the 1960s.

Watson's mastery of flatpicking helped make the guitar a lead instrument in the 1950s and 1960s, when it was often considered a backup for the mandolin, fiddle or banjo.

For much of his career he toured and recorded with his son, Merle Watson, who died in a tractor accident in 1985. He set up an annual fundraising musical event, Merlefest, in his memory.

The musician played at events across the US from folk festivals to the prestigious Carnegie Hall in New York and recorded some 60 albums, with his most popular songs including Tom Dooley, Shady Grove and Rising Sun Blues.

"He knew he wouldn't last forever, he did his best to carry the old mountain sounds to this generation," he added.

Neil Portnow, the president of the Recording Academy, praised Watson for his "masterful skills as a musician and his beautiful, emotion-filled voice".

"Watson's immense talent and spirit will be deeply missed, and our sincerest sympathies go out to his family, friends and all who were inspired by his music."