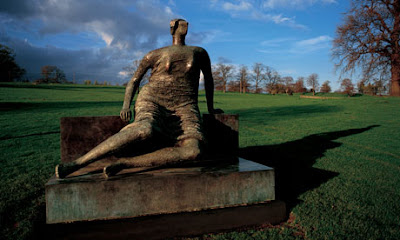 Film-maker Danny Boyle and the director of the Tate Gallery have written a letter criticising the sale of a Henry Moore sculpture by a London council.

But Sir Nicholas Serota and Boyle said the proposal "goes against the spirit of Henry Moore's original sale".

Moore, a well-known socialist, sold the sculpture at a fraction of its market value to the former London County Council on the understanding that it would be displayed in a public space and might enrich the lives of those living in a socially deprived area.

The bronze sculpture, nicknamed Old Flo, was installed on the Stifford council estate in 1962 but was vandalised and moved to the Yorkshire Sculpture Park in 1997.

In October this year, Tower Hamlets mayor Lutfur Rahman announced his decision to sell the sculpture: "It is with great regret that I take this decision but we are faced with a stark choice in these times of recession."

Sunday's open letter in the Observer was led by the artist's daughter, Mary Moore, with other signatories including artist Jeremy Deller, architect David Adjaye, Richard Calvocoressi, director of the Henry Moore Foundation and Peter Murray, director of Yorkshire Sculpture Park.

"While we understand the financial pressures that Tower Hamlets faces, we feel that the mayor's proposal goes against the spirit of Henry Moore's original sale to London County Council at a favourable price on the understanding that it would be placed in East London," they said.

"The presence of the sculpture in Stepney was a demonstration of the postwar belief that everyone, whatever their background, should have access to works of art of the highest quality.

"We appreciate that times have changed and that the costs of protecting the sculpture are demanding, but we believe that there are a number of sites in the borough where the work could be safely placed for the benefit of the community.

"We hope that Tower Hamlets will reconsider and find a suitable location that continues to honour Moore's idealistic vision."

The council said the rising threat of metal theft and vandalism made it too expensive to insure the artwork, should a suitable public venue be found on council land.

Speaking in October, a Council spokesperson said: "As the borough does not have the funds required to insure or maintain the upkeep of the work, releasing these necessary funds will enable the council to support front-line services."

The council is having to make cuts of £100m per year over the next three years.

Sir Nicholas called the sculpture "one of Moore's most important and largest single figures... a figure of great dignity and humanity".

"This £20m, if it is as much as £20m, will only make a small contribution to that overall problem. It's a one-off, selling the family silver," he told the Observer.

A final decision on the sale is expected to be made later this week, with a view to the sculpture being sold at auction in February.