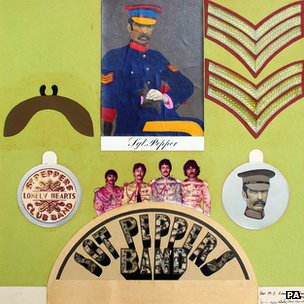 A collage by Sir Peter Blake used to create an insert for The Beatles' Sergeant Pepper album has fetched more than £50,000 at auction.

The work, which was produced in collaboration with pop artist Jann Haworth, depicts Sergeant Pepper along with the four Beatles.

Copies of it were included with the record and were intended for fans to cut out and keep.

"Sergeant Pepper’s Lonely Hearts Club Band] had a huge impact on the cultural landscape - it was the first concept album, when music, story, image and studio expertise all came together," he said.

The collage was from the collection of architect Colin St John Wilson and was presented to Wilson's wife by Sir Peter shortly after it was completed.

Sergeant Pepper's Lonely Hearts Club Band was The Beatles' eighth studio album and was released in 1967.

Sir Peter Blake and Jann Haworth designed all the original artwork for the album, including its cove featuring a collage of famous figures including Marilyn Monroe, Lenny Bruce and WC Fields.