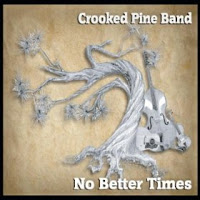 Formed originally in 1974, the three members of Crooked Pine, Frank McConnell, Marion Boatwright and Craig Bannerman were straight out of college, eager to learn and play and gig, and invariably shared all those aspirations and ambitions that young bands have. Inevitably real life got in the way, families were raised and careers outside music were forged, but they obviously didn’t lose touch with each other, and in 2010 the Crooked Pine Band were back in business.

I imagine, these days, they’re playing just for fun, which is appropriate as “No Better Times” is entertaining, enjoyable and always fun. They mix up fairly obscure covers with original material, and it’s a credit to both their writing and their feel for old-time Americana, that we’re hard pressed to tell the difference between them. They get things started with a stab at Red Clay Ramblers’ “Twisted Laurel”, and it really could have been recorded 50 years ago – or yesterday. Their take on Hank Williams’ “Settin’ the Woods on Fire” is just as affecting, and their own “Calvary”, a tribute to Levon Helm, moves at its own pace, and does strange things to the hairs on the back of the neck. All three, McConnell, Boatwright and Bannerman, are fine musicians and “No Better Times” peaks when they’re whipping up a storm together; so a special mention for the West Virginia modal medley “Greasy Coat/ The 28th of January” and the barn dance jiggery of “Julie Ann Johnson”, which links their homegrown folk dance tunes with the British tradition.
www.crookedpineband.com
www.reverbnation.com/crookedpineband
Tony S.