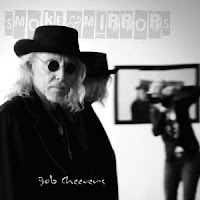 Bob Cheevers used to be a regular performer at The Musician (our local 200 seater roots venue), but I can’t say I’ve seen his name on their listings pages, lately. The Austin based singer-songwriter has obviously been busy doing other things, and this two-disc collection was undoubtedly top of his list. Split into two defined parts, disc one “Smoke” is a band effort and the second CD “Mirrors” is acoustic, though for the most part, he’s accompanied by other musicians. Separate producers were used, and it feels like two completely different records.

“Smoke” is a perfectly enjoyable collection, but it’s “Mirrors” that provides the instant connection. Perhaps it’s because I’m used to seeing Cheevers in an acoustic setting, alone on stage with just his Martin guitar and a head full of stories. Here he’s joined on several tracks by producer, and multi-instrumentalist Jeff Tveraas, and the very best songs “Days in Death Valley” and “While The World Falls Away” are beautifully written and will provide much cheer for Americana fans.

Edit: I just checked his website, and Bob Cheevers is currently touring the UK, including a date in Leicestershire at Frisby Village Hall on November 17th.
www.bobcheevers.com
www.reverbnation.com/bobcheevers
Tony S.