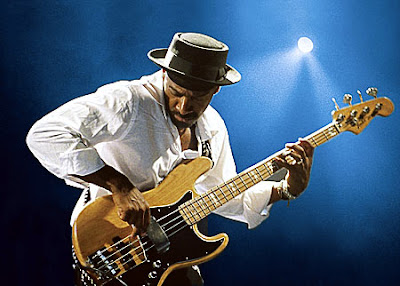 Grammy-winning jazz bassist Marcus Miller and 10 members of his band have been injured and their driver killed in a tour bus crash in Switzerland.

The bus toppled over on a bend on the A2 motorway, police said.

The driver died of his injuries. A reserve driver, Miller and the other members of the Marcus Miller Band were hurt but none had serious injuries.

The 53-year-old Miller, from New York, has played with artists ranging from Miles Davis to Eric Clapton to Jay-Z.

He won the Grammy Award for best rhythm and blues song for co-writing Luther Vandross' 1991 hit Power Of Love/Love Power.

Ten years later, he picked up a second Grammy for best contemporary jazz album for M2.

The crash happened near the town of Schattdorf in central Switzerland as the band were travelling from Monaco to the Dutch town of Hengelo, where they were due to perform on Monday.

Police said no other vehicles were involved but gave no further details of the cause of the accident or the injuries.