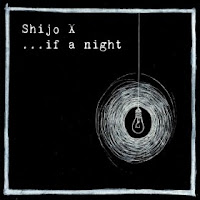 Shijo X’s Davide Verticelli and Laura Sinigaglia got together in 2009 as a duo, and released their debut LP, “One Minute Before”. In 2010 they were joined by Federico Fazia (bass) and Federico Adriani (drums) “…If a Night” is their first album as a four piece.

Taken straight into a bohemian late night, of anaesthetised bar jazz and wild Italian sci-fi soundtrack oscillations, “Bologna by Night” with a muffled, loudhailer-like vocal sounds like Portishead meets Tom Waits. Sinigaglia’s robust, but flexible voice dominates throughout, yet is adapted to the esoteric environments created by bass, drum, piano and synthesizer: be this the programmed beats of “In (the) Moscow”, the free and minimal construct of “Television”, the spaced-out clockwork of “Bad Bed”, the jazz standard-esque “Almost in trouble” or the drum ’n’ bass storm of “Krueger”.