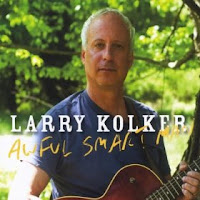 From Cortlandt Manor, NY, Larry Kolker plays regularly in venues around the North East of the USA, where his style has been described as "urban country east-coast white-boy blues". That’s a lot to take in, and is really quite specific, so to make things easier, imagine a concert with Dylan headlining, Loudon Wainwright III second on the bill and John Prine third, let’s say it wouldn’t seem at all strange if Larry Kolker opened the evening’s entertainment.

He’s certainly an all-round talent. He’s a distinctive vocalist with songwriting chops to match; an accomplished guitarist and an in demand blues-harpist. As far as I can tell “Awful Smart Man” is his second album (“Long Island Slim” came out in 2002) and although his trips to the studio are far from regular, the results are well worth seeking out. Here he begins with the title track, and the simple voice / guitar arrangement sets the mood for a self-depreciating lyric, and a near-yodel. “Send Me to the 'lectric Chair” starts slow and folksy, but when the instruments kick in, in swings like an early jazz-blues standard. There really is no shortage of variety on “Awful Smart Man”. “Top Percent” grooves like a ‘70s jam band and the marvelous “Don't Tempt Irene” rocks and rolls in a most satisfying manner. Before I sign off, I should mention his collaborators; Sticks Levine keeps the beat, folk-popsters the YaYas supply backing vocals, and co-producer / engineer Fred Gillen Jr. plays bass, and provides just enough polish for Kolker to shine.
www.reverbnation.com/larrykolker
www.larrykolker.bandcamp.com
Rob F.