Review: Stacey Unck – Through The Cracks

Stacey Unck – Through The Cracks (Independent) 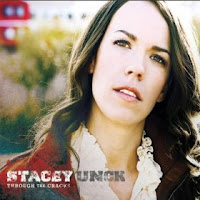 “Through The Cracks” is the debut album by Seattle based singer-songwriter Stacey Unck, and it’s a thoroughly likeable collection of folk rock songs that are honest and direct with plenty of drama. Accompanied by cellist Stephanie Roche, Unck’s voice has found the perfect foil, as her rich timbre is beautifully complimented by Roche’s sombre strokes and bass drones.

She begins her collection with the countrified tones of “Eyes Say So”. It’s quite charming with just enough jaunty pace to provide a proper introduction. It’s promptly followed by the more sedate “Fly” and the interaction between voice and cello is stirring and powerfully intense. The slower songs on “Through The Cracks” are all compelling, and with her words, Unck draws the listener into a world, which doesn’t always make for comfortable habitation, but is undeniably gripping.

“Roads We've Crossed” and “True Love Story” are prime examples and neither pull any punches, but Unck is equally adept at more upbeat numbers. “More Than I Can Tell” is bluesy and fun, and both “Belong” and “A Moment With You” bring to mind “Wrecking Ball” period EmmyLou Harris.
www.staceyunck.com
www.facebook.com/staceyunckmusic
Phil S.