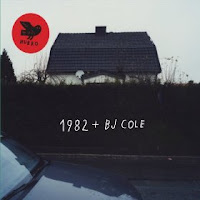 1982 is a Norwegian Improvisatory trio that comprises Nils Økland (Hardanger fiddle, violin), Sigbjorn Apeland (harmonium) and Øyvind Skarbo (drums). For some time they’d been considering playing with a guest musician in order to explore new terrain and after a chance meeting, Økland decided BJ Cole should be such a guest.

BJ Cole has been an active Pedal Steel guitarist – crossing genres from pop and rock to jazz and the avant garde - for four decades, and has staggering credentials, having worked with T-Rex, Bjork, Sting, Elton John, Emmylou Harris, Iggy Pop, REM, Brian Eno, Luke Vibert, David Sylvian, and Roy Harper, amongst others.

The amalgamated quartet spent one day in 1982’s usual Greighallen studio freely improvising with occasional random ideas or different tunings leading the way. As no track names are given, just durations, the album should be considered as a whole and it is the unique juxtaposition that makes it so interesting.

Økland plays a traditional Hardanger fiddle, which is similar to a violin but includes four or five sympathetic strings, which are not bowed but add resonance to its sound.

Although often associated with Country music Cole employs a number of devices (including ring modulator, Ebow, Leslie simulator, sitar simulator and MIDI interface) to extend the sonic scope of his instrument. To this mix add the ecclesiastical harmonium and drums and you have a totally inimitable musical blend.

Be it in places jazzier, in others scratchier or recalling the widescreen of Ry Cooder’s Paris Texas soundtrack, all in all the output provides a curious intersection between Americana, folk music, religious music, jazz, ambience, soundtrack and occasional flirtations with sci-fi.
www.1982trio.com
www.bjcole.co.uk
www.hubromusic.com
Willsk