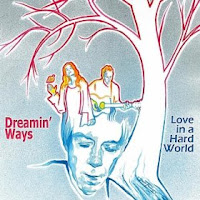 Dreamin’ Ways’ John MacDonald and Heather Walsh describe themselves as the “new old kids on the block”, which pretty much nails it. MacDonald, originally from North Bay, Ontario, but now based in Ottawa, has been writing and performing for over 30 years. Walsh’s musical background is incredibly diverse, from musical theatre and barbershop, to jazz bands and soul groups. On “Love In A Hard World” MacDonald mostly takes the lead vocal with Walsh providing harmony, and emphasizing certain phrases and hooks.

It works rather well. MacDonald’s voice is rootsy and relaxed, and he would have sounded perfectly at home fronting a country-rock band on the cusp of the ‘70s. Indeed, opening track “Quest” wouldn’t have sounded out of place on the Grateful Dead’s “Workingman’s Dead” album, and later tracks “Turning of the Wheel” and “Indian Grove” are in a similar vein. When Walsh steps up to the mic to take lead on “No Middle Ground” and “I Thought You'd Stick Around” there’s a hint of classic period Carole King to be enjoyed. Recorded live in front of a friendly, though respectful audience, “Love In A Hard World” may not be a hi-fi listening experience, but it’s still incredibly easy on the ear, and it’s good to hear the duo (and their band) in a natural performance setting.
www.reverbnation.com/dreaminways
www.facebook.com/dreaminways
www.soundcloud.com/dreaminways
Phil S.