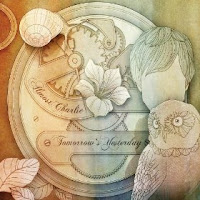 Almost Charlie is a collaboration between Berlin singer-songwriter / multi-instrumentalist Dirk Homuth and New York City songwriter Charlie Mason. They released an album in 2009 (“The Plural Of Yes”) and “Tomorrow’s Yesterday” is there brand new collection. The transatlantic duo has yet to meet face to face.

It’s probably for the best. These things usually end in tears so the less contact they have with each other the better, and hopefully they’ll make lots more records just as good as this one - and this one’s a charmer from start to finish. Considering their complete lack of Britishness, “Tomorrow’s Yesterday” seems to be seeped in ‘60s and ‘70s British influences, from McCartney powered Beatles and Colin Bluntstone’s “One Year” to Nick Drake’s half-whispered gentleness and Ray Davies whimsy; and if you’re looking for a contemporary comparison, then Neil Hannon’s Divine Comedy is as good as any.

They begin with “Hope Less” and set their stall out immediately. Lush harmonies abound, the tune will have to be surgically removed – I’m booked in for Thursday week - and we’re only three minutes in. Their songs are beautifully catchy, but they’re matched by the arrangements, Homuth’s teasing voice and the sheer diversity and multiplicity of the instrumentation. Indeed, a quick count-up reveals over a dozen devices being strummed, plucked, stroked and banged, and let’s not forget the choir.

To put it simply, if classic songwriting and pristine pop performances are your thing, meet your new favourite band.
www.words-on-music.com
www.almostcharlie.com
Simon M.