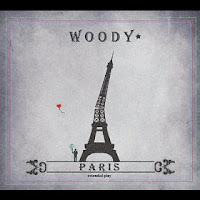 Standalone single “Wagon Wheel” promised a great deal. Its likeable folk rock style brought to mind the Mumfords and Avetts, and was “pop” enough for radio. Once embedded, it also caused subconscious outbursts of humming and whistling – the sort of thing that prevents the less confident from sitting next to you on public transport. “Paris” delivers on that promise, though just eight tracks long (31 min.) there’s not quite enough of it, though the old adage about leaving them wanting more is always worth remembering.

With his band The Nutcrackers, Woody has established himself on the local Tampa Bay circuit, and they’re both regulars on festival stages throughout Florida. A native of the state, there’s no shortage of sunshine in his songs, and it’s that feel good, summer buzz that gives “Paris” its edge. “Shine” and “Happy Days” are the most relevant examples; the latter track in particular inspires long lazy afternoons in the company of long cold beverages. The title track is fun and sounds as if it might have been recorded live, though other tracks like “Never Grow Old” reveal a more serious side, a large part of the album’s appeal is when themes do become a little earnest, important things like tunes and great hooks are never sacrificed.
www.reverbnation.com/woodylive
www.facebook.com/woodylive
Rob F.