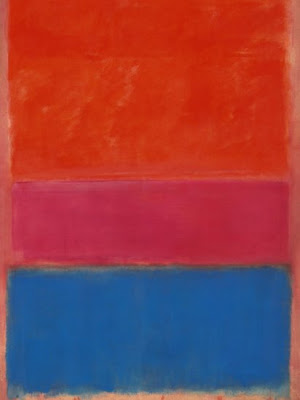 A painting by abstract artist Mark Rothko has fetched $75.1 million (£47.2m) at an auction in New York.

Rothko's No 1 (Royal Red and Blue), described by Sotheby's as "a seminal, large-scale masterpiece", was the subject of a heated bidding war.

The Rothko painting was one of eight works hand-selected by the Russian-American artist for his landmark solo show in 1954 at the Art Institute of Chicago.

It had been in the same collection for 30 years before coming to auction.

Tuesday's sale of post-war and contemporary art at Sotheby's saw plenty of interest from investors, raising a total of $375m (£236m) - the best auction result in the auction house's history.

"If you want to talk about the market being happy, healthy and well, here it is," said Sotheby's auctioneer Tobias Meyer, worldwide head of contemporary art.

"That's probably about as good as it gets."

Further high prices are expected at a second Sotheby's contemporary and post-war art sale on Wednesday, with two Christie's sales focusing on the same period also taking place in New York this week.