The Who manager Chris Stamp dies at 70 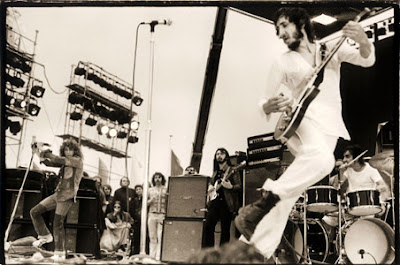 Chris Stamp, one of the original managers of The Who, has died of cancer at the age of 70.

Band member Roger Daltrey paid tribute to him on stage in Detroit on Saturday.

He described Stamp as a man "without whom we wouldn't be the band we were", according to Billboard magazine.

Stamp co-founded the group's Track Records label. He co-managed The Who with Kit Lambert and also helped to launch the career of Jimi Hendrix.

Daltrey told the audience at Joe Louis arena that Stamp "flew into the universe on a pair of rainbow wings".

"Chris, we can never thank you enough - well, I can't, for what you brought to my life," he said.

Born in London, he started out as a film-maker at Shepperton Film Studios, where he met Lambert.

In 1963, they decided to make a film about the British rock scene, when they met The Who - then known as High Numbers.

Daltrey referred to Stamp and Lambert as "the fifth and sixth members of The Who".

Stamp worked on the production for The Who's 1968 album Magic Bus and is also credited as executive producer of Who's Next, Quadrophenia and the soundtrack for Tommy.

Lambert and Stamp parted ways with the band in 1975 and Lambert died of a brain haemorrhage in 1981.

Stamp later re-established his connection with The Who, appearing in documentaries about them.

He also sat on the board of the John Entwistle Foundation, started in memory of the late Who bass player.

In a statement on The Who's website, it said the loss was "hard to bear" and that tributes would follow shortly.