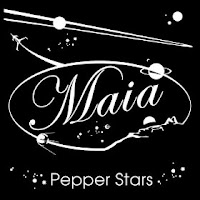 In the three year run up to “Pepper Stars” Maia have graduated from university, played live shows all over the UK, released a self-titled debut LP in 2010, the “Alligator” EP in 2012 and singles: “Living In the Alligator”, “Zuma Aluma” and “The Grandfather Plan”. They’re now receiving radio airplay. Their touring schedule has included the Cambridge Folk Festival, a residency at the Folke Newington night at London’s The Drop, a New Year’s Eve headlining slot at the Royal Festival Hall and 15 festival dates this year alone. They’ve also garnered their share of media praise and have acquired a growing following.

Music wise the charming Huddersfield quartet’s starting position is with traditional folk guitar – albeit the higher energy pop end (think Mumford and Sons or even The Levellers) – yet the self-claimed inventors of sci-fi folk have a preoccupation with space (in a vague Bowie Starman / Space Oddity fashion).

To the rabble rousing set they add some great flourishes - the trumpet gives a mildly Tijuana-style / “Forever Changes” / Belle & Sebastian air. Hillbilly banjo (“More Strangely Than The Moon”), subtle sprinklings of light strings and percussion, occasional tabla-sounding beats and Spanish inflections elaborate their astral infringements and make for an overall enthusiastic and intelligent sound. If this helps, both the fore mentioned single, “Zuma Aluma” and “Dear To” are like a very bright and cheery Magic Numbers…
www.maiatheband.com
Willsk