Review: Felecia and the Dinosaur – In The Key Of Victory

Felecia and the Dinosaur – In The Key Of Victory (Independent) 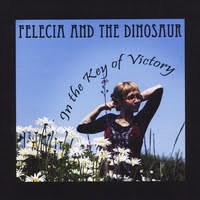 “In The Key Of Victory” is Felecia and the Dinosaur’s third album, and it was made possible by fan funding via Kickstarter. Whenever I hear stories of fans getting together to finance a release, I always assume the results are worth hearing. The artist must feel some kind of pressure to fulfill expectations and the fans must have seen and heard something to make their participation worthwhile. Well, Felecia and the Dinosaur haven’t let anyone down on “In The Key Of Victory”; it’s an album of rattling good tunes and politicised folk rock songs.

There’s a name for what Felecia and her band do, and it’s “Feminasty Folkabilly”. It’s how they describe themselves, and frankly, with a moniker like that, we’re not brave enough to argue. The Portland, Oregon group (which quintessentially comprises of Felecia Campbell with her friends) play with plenty of punky attitude and aren’t afraid of treading on a few toes or, indeed, an eye-catching song title. They begin with “Americaw!”, a paean to the downtrodden masses, played at a mix of tempos, with piano and guitar taking the musical strain – it’s a great start. On “Murder of Crows” a Polly Jean Harvey influence rises to the surface, which is always a good thing, and “Fu Tang Finds a Cure” brings out a slightly gentler side, and is a perfect diversion, until the equally pristine title track turns up with a string section, and between them, blow away all our predetermined notions…
www.feleciaandthedinosaur.com
www.facebook.com/feleciaandthedinosaur4ever
www.feleciaandthedinosaur.bandcamp.com
Tony S.