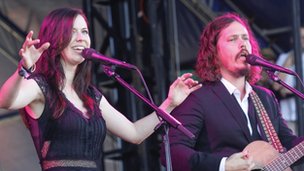 Grammy award-winners The Civil Wars have cancelled the remainder of their current tour, attributing the decision to "internal discord".

US pop-country duo Joy Williams and John Paul White had been due to play several UK dates this week.

Because of "irreconcilable differences of ambition", they said in a statement, the band were unable to "continue as a touring entity at this time".

Earlier this year the pair cancelled part of their European tour.

Writing on social networking site Facebook on Tuesday, the duo apologised to fans for the "abrupt" cancellation as "something we deeply regret".

Williams and White enjoyed success with their debut album Barton Hollow, which became the number one downloaded album on iTunes on its release in February 2011.

Williams and White, whose backgrounds are in gospel and rock, formed The Civil Wars after meeting to contribute to a country project.

Williams had a baby during the summer with her husband Nate Yetton, the duo's manager.

The band played the Roundhouse in north London on Tuesday and had been due to perform in Brighton, Coventry, Southampton and Cardiff.

Fans who have tickets for the cancelled gigs have been asked to contact the band if they have incurred any "non-refundable" costs.