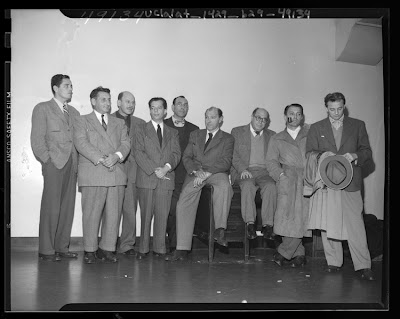 The son of Hollywood Reporter founder Billy Wilkerson has apologised for the trade paper's role in the 1940s witch-hunts that saw many in the industry ostracised for having communist ties.

The actors, writers and directors on the so-called blacklist suffered huge damage to their careers as a result.

Willie Wilkerson's apology for what he called "Hollywood's Holocaust" was published in The Hollywood Reporter.

He said his father had wanted to take revenge against "studio titans".

According to his son, Billy Wilkerson tried to establish his own studio in the late 1920s before founding The Hollywood Reporter in 1930.

"For whatever reason, the movie brass refused him entry into their 'club' and squashed his dream," Mr Wilkerson goes on. "So he found another one: exacting revenge."

After World War II, Wilkerson Senior supported the blacklist by using his paper to publish a series of editorials that attacked communist sympathisers and their supposed influence in Hollywood.

"In his maniacal quest to annihilate the studio owners, he realised that the most effective retaliation was to destroy their talent," wrote Willie Wilkerson of his father.

"In the wake of this emerging hysteria surrounding communism, the easiest way to crush the studio owners was to simply call their actors, writers and directors communists.

"Unfortunately, they would become the collateral damage of history."

The first Hollywood "blacklist" was published on 25 November 1947. Mr Wilkerson said he felt it was necessary to apologise "on the eve of this dark 65th anniversary".

Studios denied work to those named on the blacklist, forcing some writers to work under pseudonyms and others to work overseas.

The investigations of the House Un-American Activities Committee (HUAC) in the 1940s and 1950s prompted an anti-communist witch-hunt.

"Calling someone a communist today is almost laughable," wrote Willie Wilkerson, 61. "But in 1950 it was a professional death sentence.

"Instantaneously people lost their jobs, and future employment was, in too many cases, denied.

"The blacklist silenced the careers of some of the studios' greatest talent and ruined countless others merely standing on the sidelines," Wilkerson wrote.

"On behalf of my family, and particularly my late father, I wish to convey my sincerest apologies and deepest regrets to those who were victimised by this unfortunate incident."

Edward Dmytryk, Dalton Trumbo and Ring Lardner Jr were among the members of the so-called Hollywood 10 who were cited for contempt of Congress for refusing to cooperate with HUAC.

William R Wilkerson died in 1962, two years after the blacklist was broken.