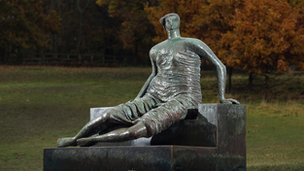 A final plea from Tower Hamlet's councillors to the mayor to refrain from the sale of a £20m Henry Moore sculpture has been rejected.

The council said the decision was made with "regret", because it must make savings of £100m in the next two years.

However, the sale could be delayed as solicitors on behalf of the Art Fund have written to the mayor with a legal challenge over who owns "Old Flo".

The work was bought by Greater London Council, which was abolished in 1986.

The charity claimed the ownership did not automatically transfer to Tower Hamlets Council in east London.

A statement said: "Our research suggests that works of public art were handled separately from land and buildings when both the London County Council and the Greater London Council were dissolved.

"For this reason our lawyers have been in touch with the Council to ask for more information, which they have so far failed to provide."

However, the Tower Hamlets borough council issued a statement on Thursday describing the Art Fund's move as a "desperate PR stunt".

It added the council, "should not have to choose between keeping a valuable cultural asset or funding local heritage projects, affordable housing and keeping its community safe".

Mayor Lutfur Rahman said: "I have a duty to ensure residents do not suffer the brunt of the horrendous cuts."

The Art Fund has denied the claims and said the question of who owns the Draped Seated Woman is "the most fundamental issue to be addressed before any sale can take place."

Tate director Nicholas Serota and Oscar-winning director Danny Boyle are among critics who have spoken out opposing the sale of the sculpture, which was sold to the old London County Council in 1962 for £7,400.

So far, 2,500 people have signed a petition against the sale.

Intended by the late artist Moore, who died in 1986, to be displayed in an underprivileged area, it is currently on loan to Yorkshire Sculpture Park in Wakefield after it was vandalised with graffiti when situated in the Stifford Estate in Tower Hamlets.

Richard Calvocoressi, director of the Henry Moore Foundation, argued on the Today Programme on Radio 4 this week that "this work is part of London's history" and should be reinstated back in London.