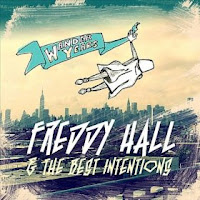 Before recording “Wander Years” New Yorker Freddie Hall spent the previous four years touring and travelling the world, living in comfy shoes and out of backpacks. The experience he gained must have influenced these recordings in many ways, though, apart from the title, there’s nothing that leaps out. Instead Hall and his band offer up pristine confections of American alternative pop and rock, a sound that links Foo Fighters, R.E.M. and Ben Folds, without sounding too much like any of them.

It’s a sterling collection. Hall’s got a good ear for a pop hook and the tunes come thick and fast. It’s not a long recording by any means – 11 tracks in 37 minutes – but there’s more than enough time for the band to make a big impression and they grab the opportunity with both hands. “Train Wreck” presents the first tangible indication of good things to come; it’s muscular and direct, with a propulsive rhythmic quality, which hurls the song forward. “Hold Love, Keep It in Your Hands” is completely different. Hall’s tumbling words provide initial focus, but as the track warms up, a certain epic quality comes to the fore. It’s a fantastic track and deserves whatever audience it finds. Other highlights include “Stories”, which injects a cool, punk edge and “A Lullaby”, a song that shows a whole different side to Hall and his cohorts.
www.freddyhallmusic.com
www.facebook.com/FreddyHallAndTheBestIntentions
Simon M.