Henry Moore sculpture to be sold by London council 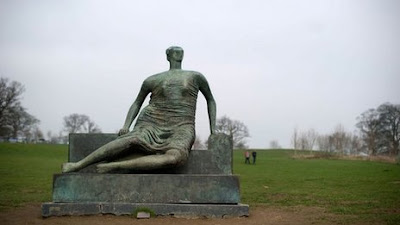 Tower Hamlets Council in London has decided to go ahead with the controversial sale of Henry Moore sculpture, Draped Seated Woman.

A council spokesperson said the "tough decision" was made due to "the massive government cuts we are facing".

Moore sold the sculpture, currently worth millions, to the council in the 1960s for less than the market value.

He had intended the artwork, currently on loan to Yorkshire Sculpture Park, to stay on display in the borough.

It was one of several that British artist Moore, who died in 1986, had sited in new towns and housing estates that were built following bomb damage from World War II.

Known as Old Flo, the sculpture was moved after the Tower Hamlets housing estate in which it was housed was demolished in the late 1990s.

Tower Hamlets Mayor Lutfur Rahman said: "It is with considerable regret that I make this decision but I have a duty to ensure residents do not suffer from the brunt of the horrendous cuts being imposed on us."

The council said "the cost of insuring the sculpture and threat of vandalism and theft has proved to be unreasonable".

Several alternative sites had been discussed, including Canary Wharf and Hackney's Victoria Park, but none were deemed suitable.

The Museum of London had also offered to display the sculpture.

Richard Calvocoressi, director of the Henry Moore Foundation, argued on the Today Programme on Radio 4 this week that "this work is part of London's history" and should be reinstated back in London.

The proposal to sell the sculpture also sparked a campaign suggesting it should be housed in east London's Olympic Park.

Boyle said the sculpture "defies all prejudice in people's minds about one of London's poorest boroughs".

The sculpture has been valued between £5 million and £20 million, but Louisa Buck from the Art Newspaper told the BBC that its sale could prove problematic.

"There's been so much controversy over the sale of the sculpture, that anybody that buys it, however much they love it, are going to be taking on the notion they have privately acquired a work that was intended by the artist to be in the public realm for the people of Tower Hamlets."

However, Councillor Rania Khan, Tower Hamlets' cabinet member for culture said they were being "judged rather harshly by the art world".

"We are not the first council to do this in order to benefit our residents and I am sure we will not be the last," said Khan.

The council quoted an online poll carried out by a local newspaper which found 55% in favour of releasing funds and 18% supporting the sculpture being relocated to nearby Victoria Park.

Professor of Public Art at Goldsmith's art college in London, Andrew Shoben, told the BBC he had a lot of sympathy for Tower Hamlets Council.

"It's their asset, they're entitled to sell it. Councils are desperate to find as much money as they can.

"Don't get me wrong, Henry Moore's work is phenomenal, but they could sell this work, it could still remain in the public domain and they could invest in new and exciting public art."

Prof Shoben, who also founded artist collective Greyworld to create art in public spaces, added that there were issues with trying to return the sculpture to the borough.

"Heavy metal sculptures are being stolen more and more and do need to be protected and looked after, they can't just be plonked into a tower block anymore," he said.