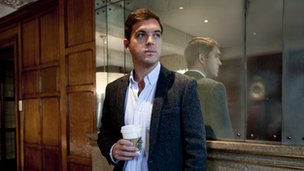 Kevin Powers has been named the winner of the Guardian First Book Award at the 14th annual ceremony in London.

The "honoured" writer thanked the panel for including his novel The Yellow Birds "with such an extraordinary and diverse group of finalists".

The story of survival, set in the context of life after serving in the Iraq war, and based on the writer's experiences, scooped a £10,000 prize.

Chair of judges Lisa Allardice, editor of the Guardian Review, added: "The Yellow Birds is a powerful meditation on war and mortality. Its subject matter is ugly and harrowing, but its expression is beautiful and poetic."

The annual award - established in 1999 - is open to all first-time authors writing in English, or translated into English, across all genres.

Powers beat competition from two other shortlisted writers, Scottish writer Kerry Hudson, for Tony Hogan Bought Me an Ice-cream Float Before He Stole My Ma, and American novelist Chad Harbach's The Art of Fielding, a story about a baseball player on the cusp of greatness.

Powers follows previous winners Zadie Smith, Jonathan Safran Foer and last year's winner Siddhartha Mukherjee, who won for his book The Emperor of All Maladies: A Biography of Cancer.