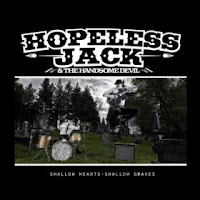 Hopeless Jack is, err, Hopeless Jack and the Handsome Devil is Smilin’ Pete. Jack sings and strums and Pete bashes and crashes. Together, the pair of them play the blues, and I’m sure when you’re presented with two musicians, a guitarist-singer and a drummer, indulging in that particular genre, certain monochrome names like White Stripes and Black Keys come most readily to mind. I’m sure Hopeless Jack and Smilin’ Pete wouldn’t object too strongly to the comparisons, but there’s something extra raw and swampy in what they do, and I’m more inclined to place them alongside other artists on the Fat Possum roster, artists like R.L. Burnside and the decidedly unpolished Paul ‘Wine’ Jones.

The invitingly titled “Shallow Hearts - Shallow Graves” hits the ground running. “Hopeless Love” boogies hard and fast, its relentless rhythmic shimmy would inspire even the most terminally undemonstrative to shake a leg or two. On “Say My Name” Jack shows what a good slide guitarist he is, and the fluidity of his style is matched by Pete’s unerring beat. They reach their pinnacle on the seven-plus minutes of “Ashley's Song”. Keyboards underpin their blues, a female backing singer wails like she’s just stepped out of a Pink Floyd “Dark Side…” session, and the duo build the tension through layers of unyielding guitar squall and walking rhythms. It’s an immense achievement, almost exhausting in its uncompromising stance. And when it ends, I generally play it again.
www.hopelessjack.com
www.facebook.com/hopelessjack
www.reverbnation.com/hopelessjackthehandsomedevil
Tony S.