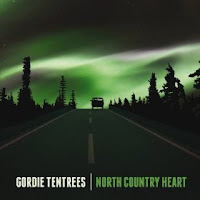 Gordie Tentrees’ fifth long player rattles along at a fair old pace. Has the Canadian singer-songwriter got somewhere to go? Who knows – probably another tour. Still, there’s no doubting that Tentrees has matured into a master of his craft, and whether he’s telling his tales fast or slow, they’re always worth hearing.

The twelve tracks of Canadian country blues that make up “North Country Heart” reflect the wilderness of his Yukon home – with the emphasis on the wild part. Certainly, the title track is almost country-punk and wouldn’t have sounded out of place on a Knitters album. He’s never quite that rambunctious again, but he gets close: “Wheel & Wrench” unashamedly rocks and “Last Word” almost slips its lead. Alternatively, when he settles into a country groove, on “Gypsy Wind”, “Holy Moly” and “Wasted Moments”, what they lacks in pedal-to-the-metal urgency, he more than compensates with needle point observational narratives and an air of desperation. In the olden days they used to call these sorts of albums “alt. country”. I still do.
www.tentrees.ca
www.facebook.com/gordie.tentrees
Tony S.