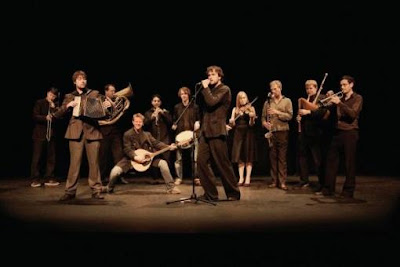 Mama Rosin / Bellowhead, Norwich Open, Friday 9th November 2012
Such is the anticipation in Norwich’s newest venue for the ever-popular Bellowhead that a huge crowd is already in place at 8 sharp to greet support act Mama Rosin. They’re scheduled for a short and sweet thirty minute slot, but the Swiss three piece set about cramming it with so many songs, styles and different instruments that it fast turns into a mini-showcase for their growing talents.

Surrounded by Bellowhead’s kit on a large stage and not helped greatly by the muddy sound, they are definitely up against it; but they weave deft touches of reggae, calypso, Orleans jazz, surf and psychedelic blues into their bedrock punked-up zydeco with passion and vigour, to the increasing delight of an otherwise partisan crowd. The more Cajun they get the more convincing they are, the champagne moment coming when the guitarist channels the late great Rockin’ Dopsie by switching his axe for a washboard and back mid-song without breaking his stride. There’s a warm glow onstage and off when the audience sends them away with hearty and prolonged applause, genuinely wanting more.

Their virtuosity notwithstanding, it’s the drama of Bellowhead that makes them really stand out among their peers. The huge ensemble lurks semi-obscured in a misty wash of purple or other autumnal hue, casting them as a crowd of operatic ragamuffins waiting to kick off; while enigmatic frontman Jon Boden is picked out sharply under the spot as less singer and more mob provocateur-come-Mephistophelian MC.

For 'Byker Hill' they are shrouded in thick fog and the effect is close to chilling. Eschewing more established attempts to modernise traditional material with electrification they remain an acoustic force of nature, core band to the centre while banks of strings to the right of them, brass to the left of them, volley and thunder. In consequence even the inevitable jigs and reels take on a symphonic air, carrying them far beyond their original compositions. They don’t try to be a rock band, much less a punk band or modern dance outfit; leaning more musically and stylistically towards Gilbert and Sullivan, Brecht/Weill and burlesque, they take their genre into previously unthinkable directions. Old habits die hard though, and they still seem compelled to introduce each song by spelling out its story in the manner of the (folk) club singer; but even for non-folkies like myself this is compelling stuff, artistically triumphant, and worthy of much respect.
www.facebook.com/Mama-Rosin
www.bellowhead.co.uk
Neil B.