Review: Ben Bedford – What We Lost 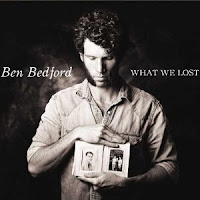 Raised in Illinois on a musical diet of The Beatles, Gordon Lightfoot, Johnny Cash, B.B. King and Townes Van Zandt, Ben Bedford started playing guitar at 14 and leant heavily on the blues. Being a University graduate in History and a former employee of the Illinois Historic Preservation Agency has informed Bedford’s time-felt and timeless storytelling, which follows in the tradition of the great American songwriters.

His questioning songs search for eternal truths, justice, peace and meaning, or examine elemental loss. The rich tales tie portraits of individuals to an intrinsically American landscape and are often set in the (sometimes very distant) past. In short, it’s a collection of emotionally stirring songwriting, with firm acoustic accompaniment.

His bygone subjects and themes, though frequently unresolved, are to be remembered and celebrated. From the murky, ghostly organ strikes of “John the Baptist” and the deeply sentimental title track (written from the perspective of his own Grandfather after the death of his brother in WWII) to “Cahokia”, on which he sings of the historical Native American mound city in Mississippi. “Vachel” chronicles the misunderstood life of 19th century Illinois native poet, Vachel Lindsay, and “Fallen”, about a seemingly unfulfilled homosexual love between two cargo-men, or “Fire in His Bones”, about Delta blues forefather, Charlie Patton.
www.benbedford.com
www.waterbug.com
Willsk