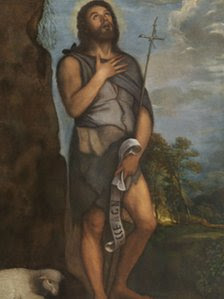 A newly attributed painting by Titian has gone on display in Spain.

Curators at the Prado museum in Madrid claim the painting of St John the Baptist, found in a Spanish church, was painted by the Italian master.

The painting, which resided in a church in Almeria for more than 120 years, was originally believed to be a copy.

The artwork, which has undergone extensive restoration, will be exhibited at Spain's national museum until early next February.

It will be shown alongside Titian's two other known versions of John the Baptist, loaned from the Accademia gallery in Venice and the monastery at the former royal palace of El Escorial, near Madrid.

The newly attributed work, found in the parish church of Nuestra Senora del Carmen in Cantoria, Southern Spain, first came to the attention of art expert Miguel Falomir - curator of the current exhibition - while he was researching a catalogue to accompany the Prado's 2003 Titian exhibition.

Mr Falomir proposed that the painting could be a copy of Titian's "lost" John the Baptist painting
In 2007, the museum undertook an extensive examination of the painting, previously attributed to "an anonymous Madrid School artist of the 17th Century", and came to the conclusion that it was an original work by Titian.

However, some experts remain sceptical: "The key thing is that the pose in the newly discovered version can now be linked back to an original concept by Titian," Bendor Grosvenord, co-director of the Philip Mould gallery in London told The Art Newspaper.

"That in itself does not mean the newly [attributed] picture is by Titian, but it almost certainly places it in the workshop at least."