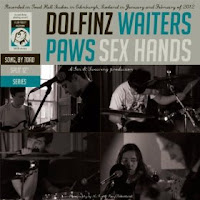 Spilt 12” sees a return to the DIY underground days of the late ‘70s and ‘80s and Song, by Toad Records has compiled 4 bands - Paws, Waiters, Sex Hands and Dolfinz – whose lo-fi guitar music has been released amongst the plethora of tiny DIY tape labels from around the country, such as Manchester’s Comfortable on a Tightrope, Plymouth’s Art is Hard, Sheffield’s Tye Die Tapes and Paws’ own Cath Records.

All four bands were recorded very quickly – a matter of hours - in a house in Edinburgh, and little time has been spent attempting to apply polish. Rarely exceeding three minutes, it’s the immediacy of the recordings that’s their attraction and offers raw, unadulterated indie magic. Collectively they recall the distorted and Velvets inspired C86 sound which embraced such indie legends as McCarthy, Pooh Sticks, Tallulah Gosh, Sea Urchins and Primal Scream.

Manchester’s Sex Hands set the scene with “Gay Marriage” with half-shouted vocals and gruff guitar economy that sidesteps any need for gloss. “So-So” by Waiters jangles along with a garage shoe-gazey laze, and as the anorak fragility of “Vacillate Wildly” ambles forward it feels as if it could fall apart at any moment.

Dolfinz have a harsher, faster edge and the latters “Kitsch Craft” implodes on itself by the sheer weight of its own feedback. At a similar pace Paws’ “Clementine” splutters along, and their instrumental closer “Cherry Blossom” kicks all pedals on and begins to melt (whilst still managing to recall the Modern Lovers).