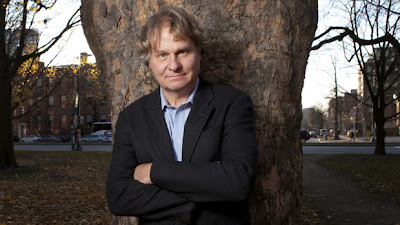 A book about explorer George Mallory's attempt to conquer Everest has been named winner of this year's Samuel Johnson Prize for Non-Fiction.

Wade Davis' book Into the Silence: The Great War, Mallory and the Conquest of Everest will receive the £20,000 prize.

Judges said the "momentous" book, the result of 10 years' research and writing, "shed new light on events and stories we thought we already knew".

The adventurer gives a detailed insight into the explorers' world, focusing on Mallory's expeditions and the impact of the Great War.

Chair of the judges, David Willetts MP, said it was a "fascinating historical narrative of a great adventure".

"It's an exciting story of human endeavour imbued with deep historical significance," he continued.

"Wade's scrupulous use of sources and attention to detail, combined with his storytelling skills and ability to enter into the minds of the people he is writing about, make this a thoroughly enlightening and enjoyable book."

Canadian Wade has written 15 books and produced the Geographic Channel's documentary series Light at the Edge of the World.

He flew into London from New York for the announcement of the prize at the Royal Institute of British Architects.

Willetts said that this year's shortlist was "very strong", which made Wade's win "all the more significant".

The rest of the judging panel was made up by writer and biographer Patrick French, The Guardian's non-fiction books editor Paul Laity, editor of Prospect magazine Bronwen Maddox, and philosopher, poet, physician and cultural critic Professor Raymond Tallis.

The prize is open to all non-fiction books published in English, by writers of any nationality, in the areas of current affairs, history, politics, science, sport, travel, biography, autobiography and the arts.

Previous winners include 1599: A Year in the Life of William Shakespeare by James Shapiro and The Suspicions of Mr Whicher by Kate Summerscale.

2012 shortlist for the Samuel Johnson Prize for Non-Fiction

Into the Silence: The Great War, Mallory and the Conquest of Everest, by Wade Davis (Winner)
Behind the Beautiful Forevers: Life, Death and Hope in a Mumbai Slum, by Katherine Boo
The Old Ways: A Journey on Foot, by Robert Macfarlane
The Better Angels of our Nature: A History of Violence and Humanity, by Steven Pinker
The Spanish Holocaust: Inquisition and Extermination in Twentieth-Century Spain, by Paul Preston
Strindberg: A Life, by Sue Prideaux