Review: The Doughboys – Shakin’ Our Souls 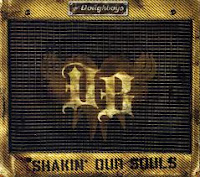 The Doughboys third studio album since their comeback – they split in 1966 and reformed in 2000 – is a bonafide rocker. The quartet of Myke Scavone (lead vocals, harp), Richard X. Heyman (drums, vocals), Mike Caruso (bass, vocals) and Gar Francis (guitar, vocals) shoot out of traps, guitars blazing, and seemingly eager to make up for the lost years. Not that the individuals involved spent 34 years sitting on their hands wondering what might have been. All four members carved out interesting music careers in the intervening years, from playing with Jimi Hendrix and fronting Ram Jam to acclaimed solo recordings and premier session work. There second album “Act Your Rage” won them worldwide acclaim and “Shakin’ Our Souls” should cement their new found rep.

So, it’s a rock record for sure, but one that’s fixed firmly in their New Jersey garage roots. Big and soulful, it fizzes with punk energy, but these four are no naïve spike-topped teenage strummers and biscuit tin bangers. They know exactly what they’re up to and the songs are constructed and arranged for maximum impact and instant thrills. Opener “Land” sets the tone. The band is on fire from the start and the track swaggers out the speakers like a power pop Steppenwolf in a hurry to get somewhere. “Rush On You” hits the pavement on a walking bass line – the swagger is no less defined – and the title track mixes up their Stones, Faces, ‘60s pop / ‘70s rock influences to fine effect. It’s no surprise to hear that Little Steven has already chosen a track from “Shakin’ Our Souls” for his Underground Garage “Coolest Song in the World” gong – just like he did for “Act Your Rage”.
www.thedoughboysnj.com
Phil S.