Without You writer Pete Ham of Badfinger's blue plaque 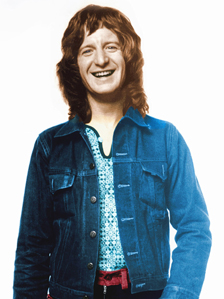 Pete Ham who wrote Harry Nilsson's 1970s chart-topper Without You is to be honoured with a blue plaque in his home city of Swansea.

Ham penned the love song which has been covered by artists including Mariah Carey.

He was a founder of the band Badfinger and worked with Beatles star George Harrison.

The plaque is to be unveiled by his daughter, Petera, who was born a month after her father took his life in 1975.

It is the first plaque to be awarded since the scheme was launched in Swansea earlier this year.

In addition to penning Without You, Ham also wrote three of Badfinger's hits - No Matter What, Day After Day and Baby Blue.

The band's first name was The Iveys, believed to refer to Ivey Place in Swansea, where it is thought they first held practices.

Badfinger signed to the Beatles' Apple label and enjoyed their biggest hit in 1970 with a Paul McCartney number, Come And Get It.

The blue plaque will be unveiled near the entrance to Swansea's railway station on 27 April.

It will be followed by a concert at Swansea's Grand Theatre featuring Bob Jackson from Badfinger and Ron Griffiths and David Jenkins, two of The Iveys' original line-up.

Petera Ham said: "I miss my father every day and I know that he will be there at the event looking down on family and friends, as they sit in his beautiful Swansea and listen to his music and honour his memory.

"I'm honoured to represent my father at the event and I'd like to thank Swansea council for the beautiful memorial plaque that they will install in honour of him."

Nick Bradley, Swansea council cabinet member for regeneration, said: "Swansea is immensely proud of Pete Ham and the blue plaque is a fitting tribute to one of our finest musical talents.

"He was a wonderfully gifted musician who wrote a series of hits and helped put Swansea on the music map in the 1970s. His legacy lives on today through his worldwide hits and the fans who still revere The Iveys and Badfinger."

The Ham estate is to release some of his early demos recordings to raise money for Local Aid Children's Charity.

"He loved children and would visit orphanages and play with the children.

"He could be quite the jokester, and make them laugh or he'd play the mouth organ and just entertain. He just wanted to brighten their day."