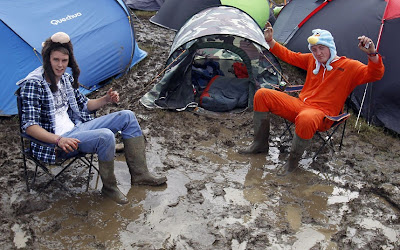 The Isle of Wight Festival will keep its licence after calls for a review were rejected.

But an Isle of Wight Council committee in Newport decided neither the capacity nor the length of the licence should be changed.

Mr Gidding's company, Solo, has also been told to provide an "event safety operational plan" to deal with traffic management and emergencies.

A council spokesman said it would "ensure that local residents, local councils and island residents are kept informed."

Mr Giddings told BBC 6Music: "I'm over the moon, it's fantastic, it's a victory for common sense."

The meeting followed an application made to the council by GKN Aerospace, based in East Cowes.

The company, which is the island's largest private employer, said it lost £50,000 in revenue because of the traffic jams.

Mr Giddings apologised for the chaos at the festival and put it down to there being a single entry into the car park.

The management structure is also to be modified to improve communication with ferry and bus companies.

As fans tried to get to this year's event, queues of cars trying to reach Seaclose Park, Newport, stretched to the ferry port at Fishbourne.

Many people spent the night in their cars.