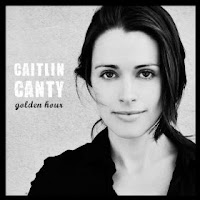 Born and raised in Vermont and now resident in New York City, Caitlin Canty stylishly unites the rural and the urban. “Golden Hour” is her third album and it’s a graceful, sophisticated recording, with elements of dark Americana and folk flirting with a mature almost-but-not-quite jazz ambience - almost as if Daniel Lanois were manning the desk.

Her band get it just right throughout “Golden Hour” adding layers of atmosphere and dusky musical tension rather than showy solos. “Every Day” and “Do Not Stand At My Grave” are equally perfect constructions, the latter has every right to be maudlin, but rises above the mawkish through sheer elegance and a subtle understanding of the theme. Lighter material such as “Southern Man” and “Vermont” add illumination and emphasize Canty’s sublime way with words. They end with a cover of Darlingside’s “Sweet and Low” – a faultless conclusion.
www.caitlincanty.com
www.facebook.com/caitlincantymusic
Rob F.