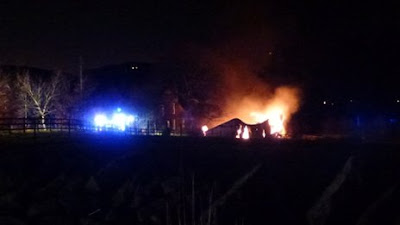 Stone Roses guitarist John Squire's art studio has burnt down at his home in Macclesfield, Cheshire, after it caught fire on Wednesday.

More than 20 firefighters were called to the fire at the converted barn next to the star's home, which is believed to have started accidentally.

Two paintings from Squire's recent Celebrity series were lost but no other works were in the studio at the time.

Squire became a full-time artist after taking a break from music in 2004.

After the Stone Roses split in 1996, he released an album with The Seahorses and a two solo efforts.

He created the Jackson Pollock-style artwork for the Roses' debut album and has since gone on to display his work in public galleries.

"Nobody was injured, which is the main thing," agent Vivienne Gaskin said.

"He only kept very recent work in the studio so there were two or three recent pieces but most had already been sold or were kept in his house so it was mainly art equipment that was destroyed."

The two destroyed works were named Aileen Wuornos and Harry Houdini, from a series of abstract paintings inspired by the public obsession with famous figures.

No Stone Roses artwork or other items relating to his music career were kept in the studio, Ms Gaskin said.

In a statement, Cheshire Fire and Rescue service said "the cause of the fire is believed to be accidental."

In an interview with the BBC News website in 2009, Squire revealed he once accidentally set fire to his hair while welding large steel boxes for an exhibition.

"I burnt my arms and my scalp on a daily basis, I set fire to my hair, the studio [and had] two visits to A&E to have shards of metal removed from my eye," he said.

The guitarist reunited with fellow Stone Roses band members over the summer for three gigs in front of 220,000 fans at Heaton Park in Manchester.