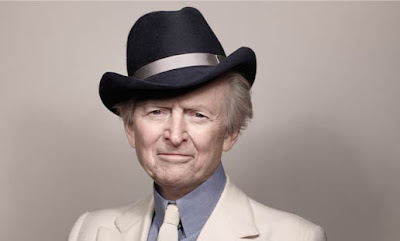 Novelist Tom Wolfe is among the list of nominees for the Literary Review's Bad Sex in Fiction Award 2012, having won the dubious accolade eight years ago.

The organisers revealed that - despite a "flood of nominations" - JK Rowling's The Casual Vacancy did not make the grade.

The tongue-in-cheek award is designed to discourage badly-written sex scenes in modern novels.

This year's winner will be announced on 4 December.

The full shortlist is: The Yips by Nicola Barker, The Adventuress by Nicholas Coleridge, Infrared by Nancy Huston, Rare Earth by Paul Mason, Noughties by Ben Masters, The Quiddity of Will Self by Sam Mills, The Divine Comedy by Craig Raine and Back to Blood by Tom Wolfe.

Bonfire of the Vanities author Wolfe won the prize in 2004 for I Am Charlotte Simmons.

An excerpt from Wolfe's nominated Back to Blood reads: "Magdalena woke up in a hypnopompic state. Something was stroking her. It caused no alarm, however, just a semiconscious bewilderment amidst her struggle to turn her lights on."

Barker's Man Booker-longlisted novel The Yips contains the passage: "She smells of almonds, like a plump Bakewell pudding; and he is the spoon, the whipped cream, the helpless dollop of warm custard.

"She steams. He applauds, his tongue hanging out (like a bloodhound espying a raw chop in a cartoon)."

"The judges considered at length the merits of JK Rowling's The Casual Vacancy," the Literary Review said, "but ultimately concluded that the book's sins were venal compared with the competition."

The purpose of the prize "is to draw attention to the crude, badly written, often perfunctory use of redundant passages of sexual description in the modern novel, and to discourage it".