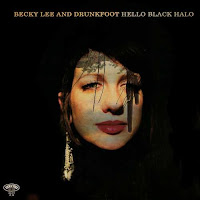 One man bands have always been a rare breed, with only contemporaries, Lewis Floyd Henry and Hawk and a Hacksaw (although performing as a duo these days) springing to mind - and one woman bands rarer still. Enter Arizona’s Becky Lee Walters aka Becky Lee and Drunkfoot, and you can’t help but be impressed.

Taking a lead from the death balladeers of the ‘50s and the girl groups of the early ‘60s, she sings of seeking love (often with the “wrong” man), murder (of mice and men!) and hedonistic relationships. Though she doesn’t want to give the impression that she’s easy, and that may be one of the reasons death seems never too far away.

The grimy subjects are attacked with a raw and powerful stripped down blues, which sounds like an imagined PJ Harvey fronting the White Stripes or Golden Animals, and “Hips Kids” has more than a touch of Shangri-Las about it.
www.voodoorhythm.com
www.facebook.com/BeckyLeeAndDrunkfoot
Willsk