Review: Memphis Slim – Rockin’ The House: The Best Of The R&B Years

Memphis Slim – Rockin’ The House: The Best Of The R&B Years (Fantastic Voyage) 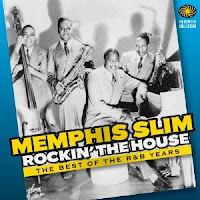 You don’t see much blues being played on piano these days. For the gigging bluesman, the guitar or harmonica is altogether more convenient. Back in the day when these songs were recorded, between 1946 and 1961, Memphis Slim was just one of many pianists playing the blues, from Pinetop Perkins and Fats Domino, to the jazzier, New Orleans style of Professor Longhair. It was a popular sound, and spawned plenty of hit records.

Memphis Slim was responsible for more than his share and there are seven R&B chart hits included amongst the 50 tracks on this excellent two-disc collection. Probably the best known is “Messin’ Round”, though I’m sure most blues fans will recognize “Nobody Loves Me”, later re-titled “Everyday I Have The Blues”, together with quite a few others. There’s a real ebullience to much of Slim’s material from this period, especially the early cuts and the floor-shaking title track is certainly worthy of special mention.

Newcomers will find much here to get excited about, and long time fans will be equally thrilled to get so much first rate material in a single package. Well-done Fantastic Voyage.
www.fantasticvoyagemusic.com
www.facebook.com/afantasticvoyage
www.twitter.com/FV_records
Rob F.