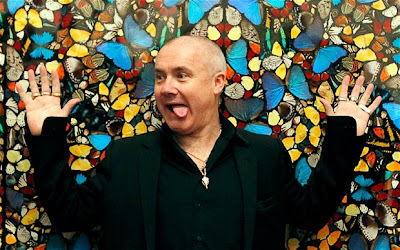 The artist, famous for his preserved animals and diamond-encrusted skull work, follows on from Sir Peter Blake and Dame Vivienne Westwood who have designed the statuette previously.

Brits chairman David Joseph said having Hirst design the statue would "make winning a 2013 Brit an even more special proposition".

The awards will be hosted again by James Corden on 20 February.

It will be the fourth time - and third consecutive year - that the Gavin and Stacey star has hosted the show.

Last year he prompted jeers from the audience when he was told by producers to cut short Adele's acceptance speech for best album.

Regarded by some as the enfant terrible of British art, Hirst was the subject of a hugely popular Tate Modern show this year.

It included a room full of live butterflies, feeding on sugar water and fruit, as well as his diamond-encrusted skull.

"We are delighted that Damien will become the third extraordinary creative Briton to re-imagine the Brit statue," Mr Joseph said.

"He is truly one of the most important British artists ever."