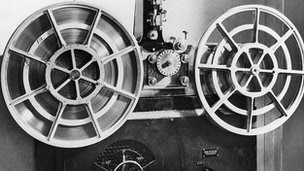 To mark its 90th anniversary, the BBC has donated a collection of nearly 1,000 historical objects to the National Media Museum.

The collection includes microphones used to capture the chimes of Big Ben in 1924 and a lip microphone used during 1930s sporting events.

It also features props and merchandise.

A display of selected objects from the collection will open to the public at the National Media Museum in Bradford 14 November.

Other highlights are the Blattnerphone (above), a broadcast recording device which captured the voice of Prime Minister Neville Chamberlain as he announced the outbreak of World War II to Britain in 1939. 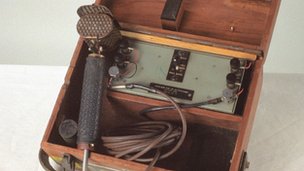 Head of BBC History, Robert Seatter, said: "I know how absolutely fascinated audiences are to see the real objects that make broadcasting happen - whether it's that special microphone or the particular prop from a seminal TV show.

"I'm delighted that this BBC collection is being shared with the National Media Museum. I hope this donation will enable more people to connect with the history of the BBC, which of course is all our history."

The rare objects will form the centre of the National Media Museum's television collection.

Jo Quinton-Tulloch, head of the National Media Museum, said the donation will make the collection "probably the best of its kind anywhere in the world. It also represents another major landmark in our flourishing partnership with the BBC".

Iain Logie Baird, curator of broadcast culture at the National Media Museum, said: "This diverse collection of objects used by the BBC covers the evolution of public service broadcasting in this country, and celebrates the rich variety of programmes the BBC has produced over the decades.

"This collection will be a great asset to the museum."

In another event marking the 90th anniversary, more than 55 BBC radio stations will come together for Radio Reunited on Wednesday.

They will broadcast a piece curated by Blur frontman and musician Damon Albarn, in the first attempt at a simultaneous broadcast since the British Broadcasting Company, as it was then known, was formed in 1922.