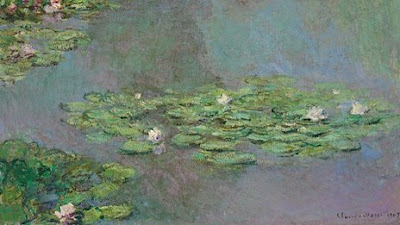 One of Claude Monet's famous water lily paintings has sold for $43.7m (£27m) at a New York auction.

A painting by Wassily Kandinsky also sold for $23m at the Christie's auction of impressionist and modern art, setting a record for the artist.

Works by Picasso and Miro also went under the hammer in the first of two weeks of major auctions in New York.

However, about 30% of the 69 paintings up for auction failed to find buyers, Reuters reported.

Monet's oil-on-canvas Nympheas - painting in 1905 during the artist's years at Giverny - reached the high end of its $30m-$50m pre-sale estimate.

Kandinsky's vibrant work Studie fur Improvisation 8 had been estimated to fetch between $20m-$30m and was sold by Switzerland's Volkart Foundation.

The price broke the Russian artist's previous record of $20.9m for Fugue set in 1990.

Among the works that failed to sell were the Picasso sculpture, Coq, estimated at $10m-$15m, and works by Chagall and Degas.

Some experts have warned the disparity between art values and the broader economy cannot continue and that while the most coveted works are rising in value, other sectors of the art market are less buoyant.

Nevertheless, Brooke Lampley, head of Impressionist and modern art at Christie's, said it was a "very, very strong sale, with great results".

Later on Thursday Sotheby's will belatedly stage its own Impressionist auction. The sale has been delayed for three days because of superstorm Sandy.

Among the 68 lots there is much interest in Pablo Picasso's Still Life with Tulips, painted in 1932 in under three hours.

Next week the two auction houses stage their contemporary sales, where works include Jean-Michel Basquiat's Untitled 1981. Its sale could set a new record for the painter.

Basquiat rose from being an obscure graffiti artist in New York to become one of the city's most lionised artists before his death of a heroin overdose in 1988.