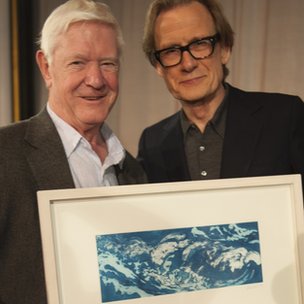 A documentary film-maker's 40 years in the industry has been celebrated at a festival in Suffolk on Saturday.

He had worked with Granada Television's drama documentary unit until 1989 when he started work as a freelance.

Among his famous films are Stones in the Park, documenting the Rolling Stones' free concert in Hyde Park in 1969, and The Hunt For Bin Laden.

He received an etching donated by Suffolk resident and artist Maggi Hambling to mark the award.

Paying tribute to Mr Woodhead's documentary work, Mr Nighy said: "In a world that is often unreliably described by commercial industries, we increasingly look elsewhere for the facts and for the true wonder of the world.

"For his brilliant and unique contribution to the genre it gives me great pleasure on behalf of the Aldeburgh Documentary Festival, to award its very first Lifetime Achievement Award to one of the original masters of the universe, Mr Leslie Woodhead."