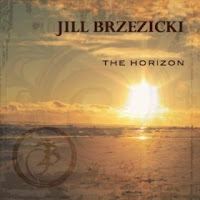 Jill Brzezicki (pronounced Brrrr-Zit-Ski) is a Colorado based, Americana singer-songwriter. Country-rock, folk and bluegrass provide the building blocks of her sound, and for those looking for easy reference points, think early Emmylou Harris and the first couple of Mary Gauthier records. She’s got a good, powerful voice and her songs are full of life, either one that she’s lived or maybe it’s a world that thrives only in her imagination. Whatever the truth, it makes for a compelling narrative.

The five year gap between albums (her debut “Consequence of Truth” was released in 2007) has allowed plenty of room for development, as a songwriter and musician. In fact, much of that time has been spent enrolled at the Rocky Mountain Song School honing her craft. “The Horizon” utilizes this growth with a series of songs that feel grown-up and complete. It begins with “Heavy Heart”, a string driven delight, and Brzezicki finds her feet immediately, producing an inspired performance. It’s the first of many; “Dreamer” wanders beautifully and suggests a familiarity with older, European folk traditions and the title track pleasingly chugs along, revealing layers, and feels so urban and intrinsically American, it’s probably best experienced lounging on tenement steps.
www.jillbrzezicki.com
www.facebook.com/Jill-Brzezicki
Rob F.