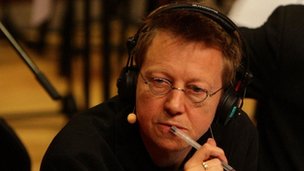 Broadcaster Simon Mayo has been nominated for a prestigious literary award for his first novel, Itch.

The DJ is on the longlist for the Carnegie Medal, which counts CS Lewis and Philip Pullman as previous winners.

Itch tells the story of an accident-prone teenager who tries to collect all the elements in the periodic table in his bedroom.

The Carnegie Medal is an annual award made to the writer of an outstanding book for children.

The winner is chosen by librarians and other writers, including Frank Cottrell Boyce who won the award in 2005 and worked alongside Danny Boyle on the 2012 Olympics opening ceremony.

Chair of this year's judging panel, Karen Robinson, said: "This fantastic longlist - the largest ever - represents the high quality of children's publishing that we have here in the UK and is a testament to the enthusiasm of children's librarians across the country.

"In these difficult times it is really heartening that more librarians than ever can still find the time to nominate.

"Judges have a hard task in front of them to read and assess all these exceptional books by our specific awards criteria but their dedication and enthusiasm is second to none and we are all looking forward to the challenge," she added.

Other names on the longlist include Irish novelist Roddy Doyle who is nominated for his book, A Greyhound of a Girl.

Last year's winner was Patrick Ness who was chosen for his book, Monster Calls.

The shortlist will be announced on 19 March, with the overall winner - chosen in June - receiving a gold medal and £500 worth of books to donate to a library of their choice.

Mayo joined Radio 1 in 1986, taking over the station's breakfast show from Mike Smith in 1988.

Since 2009, he has presented the Simon Mayo Drivetime show on Radio 2 while also presenting a film review programme on 5 live alongside the movie critic, Mark Kermode.

Mayo, who has won a series of radio awards, was also a regular presenter of BBC One's Top of the Pops.