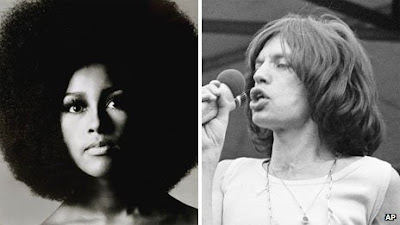 A series of letters sent by Mick Jagger to his secret lover, the American singer Marsha Hunt, are being put up for auction.

Described as "beautifully-written and lyrical", they were written in the summer of 1969 while the Rolling Stones singer was in Australia.

The letters include song lyrics and references to the first moon landing.

They go under the hammer at Sotheby's in London on 12 December.

"These beautifully written and lyrical letters from the heart of the cultural and social revolution of 1969, frame a vivid moment in cultural history," said Dr Gabriel Heaton, Sotheby's Books Specialist.

"Here we see Mick Jagger, not as the global superstar he has become, but as a poetic and self-aware 25-year-old, with wide-ranging intellectual and artistic interests."

The letters, written by Jagger while filming Ned Kelly in the Australian outback, will be the centrepiece of an English literature and history sale.

Jagger's relationship with Marianne Faithfull was under strain at the time - she was due to play the lead role in the film but attempted suicide in Australia and went back to England. 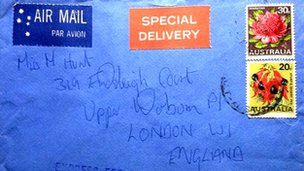 "When a serious historian finally examines how and why Britain's boy bands affected international culture and politics, this well-preserved collection of Mick Jagger's handwritten letters will be a revelation," said Hunt, in a statement released by Sotheby's.

"They're addressed to me. I was 23, American-born, Berkeley educated, and London-based. Despite his high profile and my own as a singer, actress, Vogue model and star of London's original Hair cast, our delicate love affair remains as much part of his secret history as his concerns over the death of Brian Jones and the suicide attempt of his girlfriend, Marianne Faithfull."

The singer, the mother of Jagger's first child, and the inspiration behind the Stones' 1971 hit Brown Sugar, told The Guardian she needed to raise funds to repair her house in France.